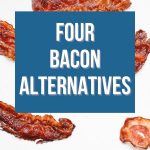 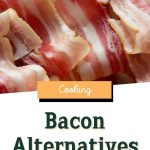 There is nothing like the smell of bacon on a weekend morning. Along with a great cup of coffee, the aroma is a delight to the senses. Unfortunately, that breakfast staple costs a lot more than it did a year ago.

Bacon prices, along with most other groceries, are soaring. “Bacon is more expensive for Americans than it has been in the past 40 years,” according to a CNN report. That estimate includes inflation.

Why are prices soaring, and what are some bacon alternatives?

Is Bacon Getting More Expensive?

Yes! Bacon costs 28% percent more than it did a year ago. Causes include supply chain issues and increased demand. While groceries overall are getting more expensive, and there are shortages all over (like chicken wings), industry-specific problems are causing a more significant spike in bacon costs.

Many analysts do not expect prices to come down any time soon. Some are estimating some time in 2022. However, they caution that even when the problems causing inflated prices to alleviate, consumers won’t see lower prices for some time. “Retailers are typically slow to bring bacon prices back down,” economist Adam Speck told CNN Business.

What do we do if we crave the salty goodness that bacon brings to dishes? Depending on the recipe and use, there are several great bacon alternatives.

If you are looking for a great alternative to bacon for breakfast, ham is the way to go. Chopped ham is ⅓ of the price of bacon. It won’t add the same crunch, but it will add a salty component. Ham will work in omelets, we and pasta dishes.

Closest To The Original Bacon Alternative

These two types of meat have so much in common. They are both cured and uncooked pork belly.

The main difference is an additional step when making bacon, smoking.

Pancetta doesn’t have as much smoky flavor and is sold as sheets. The flat-shaped fries like bacon and the cubed version work well to replace chopped bacon in risotto, pasta dishes, and soups. It’s a little more expensive but is a simple substitute.

Not all vegan options are equal, so plant-based doesn’t automatically assume more nutritious. Be sure to read the labels to make informed decisions. Ingredients vary greatly. Some include tempeh, soy, beans, or coconut oil, although most manufacturers impart the smokiness we love.

Bacon Substitute You Likely Have In Your Pantry

If you are in a pinch and need bacon for a recipe, a dash of soy sauce may do the trick. It won’t work in every instance but adds that salty umami flavor bacon imparts.

Have you noticed the price of bacon increasing? Has it been hard to find? What bacon alternatives are you using? Let me know in the comments below; I’d love to hear.

Bacon isn’t the only food that has shortages. Parmesan Cheese has also been affected. But not to worry, we have great alternatives you can easily find in the grocery store.