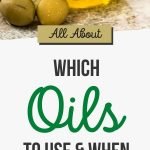 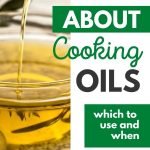 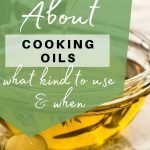 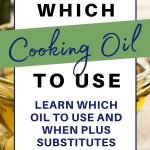 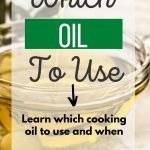 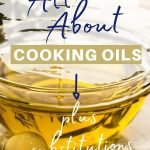 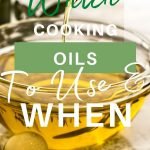 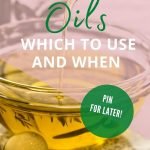 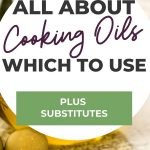 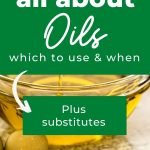 I am almost embarrassed to admit it, but I love to fry things. I don’t know why. Perhaps it is the delicious food that it creates or the fact that it reminds me of my childhood. My mom made chicken cutlets all the time, and it is still the ultimate comfort food for me. No worries, I like to counter my fried food obsession with lots of salads. Recently, I have been making dressings from scratch.

Also, our CSA has been giving us some beautiful eggplants this year, and since my little guy loves eggplant parmesan, I have been making it quite often. As I stood over the stove, I looked at all of the oils I had. Vegetable, olive, canola, sunflower, and avocado oils were all in my cupboard. As I stared at them, I realized that I had no idea which one to use when. Recipes must have included them, which was why I bought them at some point.

If I knew which oils worked in similar ways and had identical flavors, I could use up what I own and have more confidence in any swaps.

Want to learn the best substitutes for oil and what the differences are between the varieties?

Don’t have time to read it all? Here is The Chalkboard version for cooking oil.

No article on cooking oils would be complete without mentioning the smoke point. A simple definition is a temperature at which an oil stops shimmering and starts sending out smoke. Every cooking fat has one, whether it is butter, lard, or oil.

Highly flavorful oils –think olive and walnut-–are packed with enzymes that don’t necessarily work well with high heat. They can quickly go rancid, and therefore they are best for salad dressings and drizzling. To produce oils with high smoke points, they need to be processed heavily.  Manufacturers use various methods, including bleaching, filtering, and high-temperature heating, to eliminate the compound that makes the food rancid. These processes produce neutral-flavored oils –think canola, vegetable-– that can withstand large amounts of heat and have long shelf lives.

Heating past the smoke point isn’t necessarily a bad thing. But when you are cooking with flavorful oils, and you see that smoke, you are getting close to the danger zone. It means that the chemical acrolein is beginning to release. Acrolein is what causes burnt food to be acidic and bitter.

It is essential to know the smoke point because it will help your cooking. The higher the number, the more heat it can handle. Those with lower numbers are best used for salad dressing and sauteeing, while higher smoke points are best for deep frying and searing.

Serious Eats has an excellent description of the smoke point for various cooking oils along with a handy chart.

The oil that is prevalent in Mediterranean cooking, the origin of olive oil vary, but some have it dating back to 500 BC. Historians believe that the olive tree originated in Greece and spread throughout the region as the Greeks and Phoenicians explored.

What Is The Difference Between The Various Types Of Olive Oils?

You are likely to find several versions of this cooking oil in the grocery store. Extra virgin is from the first pressing of the olives. This process creates an oil that is the most flavorful and more expensive.

Further presses of the fruit then create regular olive oil. The second press makes a less flavorful version that some people want.

The light version has nothing to do with fat content. Instead, it means that it is processed further to impart less flavor. There are the same amount of calories and fat as the other versions. Since light olive oil is processed more, it has a higher smoke point than the extra virgin variety.

What Is The Smoke Point Of Olive Oil

325-375 degrees with the light version on the higher end of the numbers.

The extra virgin version has the most robust flavor, making it the best for salad dressings, finishing dishes, and any place you want to impart flavor. Regular olive oil is less expensive and less flavorful; it’s great for sauteeing foods. You don’t want to use any type of olive oil for frying. While it would certainly work in a pinch, it is costly, and the amount you would use for frying would make it a very pricey endeavor.

Sunflower oil has the same smoke point but has a neutral flavor, so it’s an excellent sauteeing choice. For salad dressings and finishing, grapeseed is cheaper and works well for sauces and finishing. It has less flavor so that the other ingredients will stand out more.

It’s a neutral-flavored oil that is quite versatile. It works well for salad dressings, marinades, and cooking at whatever heat you require. Canola is the oil to use for baking.

What Is The Smoke Point Of Canola Oil?

Vegetable has a similar neutral taste and smoke point that makes it a good alternative.

What is the difference between the two? Vegetable oil is from a blend of oils, and canola is from the rapeseed plants.

Manufacturers crush various vegetables to extract their oils for this variety. The mixture is then heated and processed. It has a neutral taste and high smoke point. Since it is a combination of several different vegetables, it is hard to determine the exact smoke point and fat content.

The neutral flavor works well for salad dressings, marinades, and cooking. It can withstand high heat, so frying and searing are options, too.

What Is A Replacement For Vegetable Oil In Baking?

What Is The Smoke Point Of Vegetable Oil?

Yes, you read that right, oil from a sunflower. Well, not the flower but the seeds. This variety is naturally extracted from sunflower seeds and bears a neutral taste.

What Is The Smoke Point Of Sunflower Oil?

Sunflower is an excellent choice for frying since it has such a high smoke point. Most of the sunflower oils sold in the U.S. are refined and have a neutral taste. Unrefined sunflower oil is tougher to find. If you do get your hands on crude sunflower oil, use it in dressings and finishing dishes.

To make this variety of oil, a portion of the corn’s inside, called the germ, is extracted. It is then refined, just like other vegetable oils. Some kinds of margarine include corn oil. The processing removes the smell, flavor, as well as many nutrients.

This type is prevalent since it is readily available and cheap. Many commercial kitchens use corn oil for deep frying.

What Is The Smoke Point Of Corn Oil?

The peanut variety is a type of vegetable oil made by pressing peanut kernels, containing about 50% oil.

According to the American College of Allergy, Asthma, and Immunology, most people with peanut allergies can safely ingest the oil. Processing removes the allergenic component from highly refined peanut oil.

High heat cooking is excellent for peanut oil. Try it when you deep fry or stir-fry. Peanut oil is also popular in Asian cuisine.

What Is The Smoke Point Of Peanut Oil?

The process for creating avocado oil is similar to that of olive oil. The fruits get crushed, the skins and stones removed, and the flesh ground to a paste. Then, machines churn the mixture to create the oil.

This oil is excellent for sauteing, grilling, frying, and baking at high heat. Since it has a neutral taste, it also works in dressings.

Substitute for avocado oil varies based on usage. You can swap olive oil for dressings, and sauteeing and canola oil for baking.

Both avocado and olive oil have a very similar fatty acid composition. Olive oil has a more pungent taste. Avocado oil has a much higher smoke point.

What Is The Smoke Point Of Avocado Oil?

How many cooking oils do you own? Which do you like to use for cooking and baking? Let me know in the comments below.

Before You Go…Pin This For Later!

Previous Post: « All About Garlic
Next Post: We Reviewed 10 Online Recipe Organizers, And There Are Clear Winners »