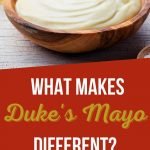 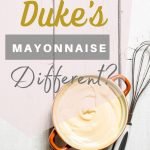 I can still remember the day in early December. I was doing my typical online grocery shopping, and there it was, something I had heard of for years but had never actually seen — Duke’s mayonnaise. Long-lauded by my Southern friends, I had wanted to try it for years but could never find it — until now. I was intrigued.

I can honestly say that it lived up to the hype. It added a fresh taste to everything I used it in. And I used it a lot! I posted my love for it on Facebook and talked to my friends about it. I was obsessed.

It all started when Eugenia Duke started selling her sandwiches to National Guard soldiers at Camp Sevier near her home in Greenville, South Carolina. Duke’s chicken salad, pimento cheese, and egg salad all included her homemade spread. The operation grew over time as Duke bought a food truck (way ahead of her time) and then had a brick-and-mortar shop in a local hotel.

In 1923, one of Duke’s salesmen noticed her mayonnaise’s popularity and suggested they start selling bottles. That business took off, and by 1929, Duke was struggling to keep up with the demand. She then sold her stake to another local company.

So what makes Duke’s so great? Why were the soldiers and Greenville residents so enthralled with Eugina’s sandwich spread? It likely comes down to the ingredients. Mayonnaise is a pretty simple recipe with only a few ingredients.

Both contain Soybean oil, eggs, and salt. Duke’s mayonnaise contains a combination of distilled and cider vinegar, while Hellman’s only contains distilled vinegar which makes Duke’s tangier.  Hellman’s also contains lemon juice concentrate and sugar. Duke’s is the only mass-produced mayonnaise that does NOT include sugar. The company is quite proud of this fact.

Duke’s and Hellman’s are NOT the same!

What Does Duke’s Mayonnaise Taste Like? Is Duke’s Good?

Duke’s mayonnaise does NOT taste like Hellman’s! It’s a bit tangier (in a good way), smoother, and creamier. The extra flavor likely comes from the combination of apple cider and distilled vinegar.  We use it in our BLTs in this meal plan.

Where To Buy Duke’s Mayonnaise?

For years I heard about Duke’s but could never get my hands on it since I lived up North. It has been readily available in grocery stores in the Southern United States, but just recently, I have seen it more and more. It is now available at Walmart, Amazon Fresh, and other smaller grocery stores. The company has a very helpful store locator.

If you can’t find it in stores, Lifehacker has a pretty good recipe. It’s not exact, but it’s pretty darn close!

Duke’s has been owned by Sauer Brands since 1929 when Eugenia Duke sold the company.

Where Is Duke’s Made?

Have you tried Duke’s Mayonnaise? Or is another brand your favorite? Let me know in the comments below; I’d love to hear!

Previous Post: « Is There Going To Be A Parmesan Cheese Shortage In 2021 — Here’s What You Need To Know And 3 Great Substitutes
Next Post: Learn How To Get Kids To Eat Vegetables With These 4 Easy Tips »