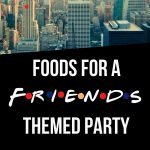 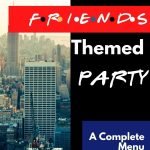 A lot of us shed a tear when Friends came off Netflix in 2020. We were used to falling asleep to our favorite episodes. The relationships of the quirky characters are so familiar and comforting. Even though it ended over 15 years ago, with millions of streams a month, it has recently had a resurgence.

It’s not just famous because of the recent Reunion special on HBO Max but because a new generation has caught on to the simplicity of what some call one of the best television shows ever.

It’s time to have a party with loved ones to celebrate a show that we have all come to love. Want to host a Friends themed party?

Most importantly, what is the best Friends-themed party foods?

This get-together has fun food from various episodes. If you are short on time, feel free to use take-out or premade substitutes. It’s about having fun with loved ones, not slaving away in the kitchen!

The One With A Dozen Lasagnas

These lasagna bites are the perfect appetizer. They come together in a fraction of time from the typical casserole and are delicious to boot. Of course, you could be like Monica and add some meat to them. Add cooked sausage or chopped meatballs at step four. Don’t worry; I won’t tell Aunt Sylvia.

The One With The Ride-Along

Joey didn’t let anything come between him and his meatball hero. Not even a bullet! During The One With The Ridealong, the guys went out with Phoebe’s police officer boyfriend, Gary, played by Michael Rapaport. A loud noise, thought to be a bullet, had Joey rushing to save his sandwich. Unfortunately, Ross just happened to be close by, and everyone thought he was saving his friend. In reality, he was trying to save his sandwich. The depth of Joey’s love for the meatball sub only came out after Chandler expressed how upset he was that he wasn’t saved.

These meatball heroes may or may not be worth saving in an emergency, but they are darn good.  This appetizer comes together in no time with the use of frozen meatballs. I find the Costco version they recommend a little salty, so I would perhaps make my own if I had the time. However, my family loves them.

The One Where Ross Can’t Flirt

The cast loved pizza so much it was in several episodes. While Joey constantly professed his love for this comfort food, he wasn’t alone. In The One Where Ross Can’t Flirt, the paleontologist had a crush on the delivery girl and kept ordering pizzas so that he could see her again. This veggie version is not traditional New York-style, but it is flavorful and compliments the other appetizers nicely. So if you are short on time, order a pizza for delivery and cut it up.

The One With Five Steaks And An Eggplant

In this episode, Monica and Chandler want to go out to celebrate Ross’s birthday. They plan to visit a fancy restaurant that bothers Joey, Phoebe, and Rachel, who find the dinners out of their budgets. Monica comes back with a plan to make five steaks and an eggplant. That is the bulk of this dinner. Grill five steaks or one steak and cut it into pieces.

The One With Five Steaks And An Eggplant

Grilled eggplant makes a great side dish. This version can even be made ahead of time and just reheated or even served cold; it’s so versatile.

The One With The Rumor

Paying homage to the Thanksgiving episodes, you can grill a whole chicken just like Monica makes for Chandler, who famously hates the holiday and everything that goes with it.  Beer can chickens are very easy and produce moist meat. If you don’t want to use alcohol, chicken stock can substitute, and if you aren’t using a grill, this can be made in the oven. And if you are pinched for time, just grab a rotisserie.

The One With The Rumor

Also part of the Thanksgiving menu, Brad Pitt famously yelled to “pass the yams!” While technically yams and sweet potatoes are different, “Most of the so-called yams you see in American grocery stores are orange-fleshed sweet potatoes,” cookbook author Mary-Frances Heck told Bon Appetit. These sweet potato fries are the BEST. The cornstarch makes them extra crispy. Try them!

This arugula salad takes little time to prepare and makes a beautiful presentation. In addition, the cranberries give the nod to Thanksgiving.

I can only imagine the amount of time these friends spent at Central Perk drinking coffee. So no Friends-themed party would be complete without this hot beverage on the menu.

The One Where Ross Got High

Rachel is given the rare opportunity to make a dessert for the holiday. The pages of her cookbook stick together and create quite the concoction. “ It’s a trifle.  It’s got all these layers.  First, there’s a layer of ladyfingers, then jam. Then custard, which I made from scratch, then raspberries, more ladyfingers.  Then beef sautéed with peas and onions. Then a little bit more custard. then bananas, and then I put whipped cream on top.”

This version leaves OUT the beef sauteed with peas and onions, and I’m pretty confident your guests will thank you for that!

The One With All The Cheesecakes

Mama’s little bakery delivers a cheesecake to the wrong address, and Chandler and Rachel eat it anyway. This dessert is so good; they are later caught eating it off the hallway floor! This dessert may not be from Mama’s Little Bakery, but the recipe author imagines it tastes like this one from, and I agree.

A recipe from Phoebe’s grandmother, these cookies were a massive hit with the friends. Monica loved them so much she tried to figure out the recipe. Several batches later, Phoebe realized that they were from Nestle Tollhouse. If you want to get fancy, make big cookies and place ice cream between two cookies for a delicious Chipwich!

What are you planning to serve at your Friends themed party? Let me know in the comments below. I’d love to hear. If you are interested in other theme party menus, check out our Roaring 20s and Bravo menus.

Previous Post: « An Honest Imperfect Foods Review For 2022- Is It Worth It?
Next Post: The BEST 7-Day Beach Vacation Meal Plan With Recipes »