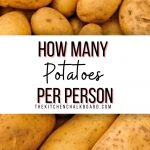 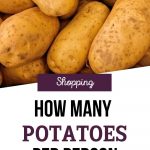 Growing up, my grandfather cooked for us often, and boy, was he a great chef. He could make a delicious meal out of the simplest ingredients.

And don’t get me started about leftovers! Mashed potatoes became potato pancakes, turkey became sandwiches, and pasta was now a casserole. That man could breathe new life into almost anything.

These meals were necessary because, as a former cook in the army, he would only make massive quantities of food. A large stock pot was the norm in his house. I forgot to mention that we had a small family of four.

Fast forward to today, and while I gained his love of repurposing leftovers,  I am trying not to overcook. One ingredient I constantly struggle with is potatoes. It seems as though I always make enough for the entire neighborhood.

Too many potatoes isn’t a huge issue since I love these starchy carbs, but I would like to know just how many potatoes per person are needed. If you are inundated with too many mashed potatoes or overloaded with baked potatoes, french fries, or potato salad, this post is for you.

Want to learn how many potatoes per person to buy and cook?

How Many Potatoes Per Person — The Average Potato Sizes

Americans love their potatoes. The average person consumes over 120 pounds of this starchy veggie each year. That’s more than double the amount of lettuce we eat. It’s safe to say that potatoes are pretty popular.

The average potato weighs 5-10oz. Anything that weighs more is considered large.

Loose potatoes on a grocery store display are often larger and meant for baking since consumers usually buy one per person. Bags typically contain medium-sized potatoes.

How Many Roasted Potatoes Per Person

An average serving size is ½ pound of roasted potatoes per person.

How Many Pounds of Mashed Potatoes Per Person

Typically, you want to make ½ pound of mashed potatoes per person.

How Much Potato Salad Per Person

Potato salad is often on the menu at cookouts and BBQs with other sides. Since there are other options, the portions are smaller.

*Amounts are rounded to the nearest ounce to make cooking and scaling recipes easier.

How many potatoes per person do you typically make? Let me know in the comments below. I’d love to hear.

How Much Pasta Per Person

Can You Eat Shrimp Tails?

How To Stop Rice From Overflowing

Previous Post: « 13 Easy Steak-Umm Recipes That Will Have Dinner On The Table In No Time
Next Post: Everything You Want To Know About Kirkland Pesto Plus 11 Great Ways To Use This Costco Condiment »