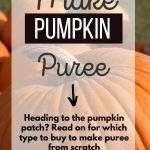 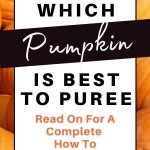 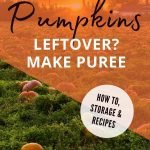 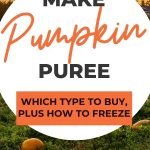 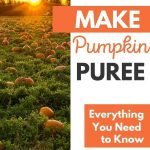 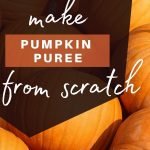 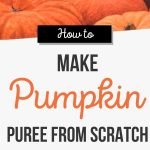 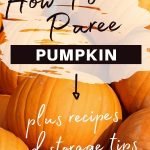 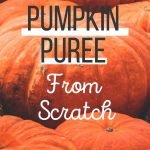 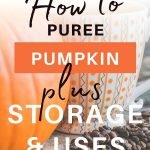 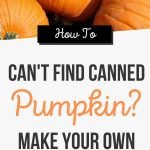 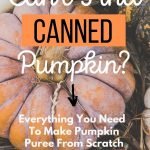 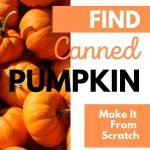 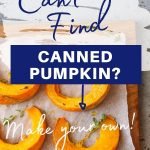 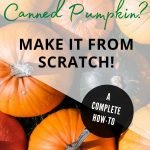 It all started with Curious George.

Story time in our house is always an exciting time.  It usually involves me reading while my little ones ask ten thousand questions.  The conversations vary from what are clouds made of to the most recent, how does pumpkin pie taste?

Curious George was eating a pumpkin pie, and my husband pipes in, “Can you make a pumpkin pie?” I was ecstatic! My family never asks for any specific food. Let alone a vegetable! I’m counting pie as a vegetable in this instance.  It’s an ingredient, right?

Before we make a pie, we need to make the pumpkin puree.  Let’s go to the chalkboard.

Want to learn how to make pumpkin puree from scratch?

Best Type of Pumpkin To Puree

Off I went to get a pumpkin.  My plan was to get a sugar pumpkin.  A farm stand, grocery store, and nursery later I finally found the perfect pumpkin. It’s not a sugar pumpkin though. It’s a cheese pumpkin. The owner of the garden center insisted that’s the way go and she has made many award-winning pies.  She showed me the ribbons and pictures to prove it. I was sold.

So pumpkin bought, perhaps overbought — 11 pounds!!  Now, how the heck do you cook it? The first step is to cut the pumpkin in half lengthwise. My chef’s knife was no match for this beast of a pumpkin.  Enter my husband and the S. I’m not sure if he was more excited to use the power tool or get the pumpkin pie.

A few minutes and we had a pumpkin sliced in half. Your pumpkin will most likely be smaller, so you can certainly use your chef’s knife to cut it.

If you can’t find a cheese pumpkin, other varieties will undoubtedly do the trick. Over the years, I have tried many types and haven’t tasted much of a difference. Some have more liquid than others, which aren’t an issue; they just add some time to cooking.

Are you going to a pumpkin patch? Here are some varieties to buy.

Now, how the heck do you cook it? The first step is to cut the pumpkin in half lengthwise. My chef’s knife was no match for this beast of a pumpkin.  Enter my husband and the Sawzall. I’m not sure if he was more excited to use the power tool or get the pumpkin pie.

A few minutes and we had a pumpkin sliced in half. Your pumpkin will most likely be smaller, so you can undoubtedly use your chef’s knife to cut it.

Preheat the oven to 400 degrees and remove the seeds and strings from the pumpkin. Make some shallow cuts with a knife to the outside of the pumpkin to allow steam to escape.

Place your pumpkin on a rimmed baking sheet cut side down. Pour some water on the baking sheet. This will help steam the pumpkin and get it nice and soft. Cook in the oven for about 30-40 minutes until the pumpkin is easily pierced with a paring knife. My pumpkin was so large that I cooked it on two baking sheets.

Remove from the oven until cool enough to handle.

Now, this is important. You will find the pumpkin puree to be a little watery. To combat this, place the pumpkin-filled pot over medium heat for about 10 minutes until the excess moisture is evaporated.  Do not skip this step. This is what gives your puree some thickness.  I still had some water after about 15 minutes so I strained it out.

Pumpkin adds some great richness to dishes without the fat. It is high in Vitamin  A and fiber.

Here are some recipes to try.

Pumpkin Bread by Once Upon A Chef, I  make this recipe all the time. Jenn Segal is the real deal, and her recipes never disappoint! I love that you don’t need to bust out the stand mixer for this recipe, and it yields two loaves and freezes well.

The Pumpkin Pie Casserole by The Black Peppercorn is a super simple recipe that is a great dessert for Thanksgiving.

Recipe Girl’s Pumpkin Chocolate Chip Squares combines pumpkin and chocolate chips. It is easy to prepare and makes a simple breakfast that everyone will love. Pumpkin Granola by Live Eat Learn makes a great snack. Add it to yogurt, or just by itself, it’s yummy!

How to Store/Freeze Pureed Pumpkin

So you’ve made your fresh pumpkin puree. Yay!!  My eleven-pound pumpkin yielded about 8 cups of puree.  We can’t possibly eat that in one sitting, so it’s best to store it. The puree will last several days in the refrigerator.  If you aren’t going to use it right away, it’s best to keep it in the freezer.

Since most recipes call for 2 cups of puree, that’s how I portioned it.  I then vacuum sealed them using my trusty vacuum sealer.  You can also place it in a freezer Ziploc bag, just be sure to remove as much air as possible from the bag before freezing.

Canned pumpkin and pumpkin puree are the same thing, and they taste the same. You look at the list of ingredients, and most canned pumpkin will have only one ingredient — pumpkin.  I’ve found no difference between the puree I made and canned pumpkin.Now, the canned pumpkin pie mix is different. The canned version is a puree, combined with sugar and spices.  I don’t recommend using this. You can easily use canned pumpkin while making a recipe; just add the cloves, nutmeg, allspice, and sugar yourself, which will give you control over the taste. If you have a well-stocked pantry, you likely have the ingredients you need.

Have you made your own pumpkin puree? Prefer the canned stuff? Let me know in the comments and head on over to The Kitchen Chalkboard’s Pinterest Board, All Things Pumpkin, to see how to use pumpkin puree or canned pumpkin.

Have you made pumpkin puree? Prefer the canned stuff? Let me know in the comments and head on over to The Kitchen Chalkboard’s Pinterest Board, All Things Pumpkin, to see how to use pumpkin puree or canned pumpkin.