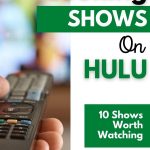 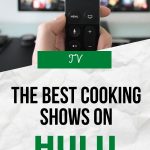 One of our thoughts here at The Kitchen Chalkboard is that cooking should be fun. It is not just the notion of throwing some food on a plate to get dinner on the table. It’s a hobby that can be enjoyable and entertaining. Food shows are a big part of that.

Whether you are looking for inspiration and want to see what’s cooking worldwide or enjoy a laugh, food shows are perfect. But, with so many streaming services and cable channels, it’s tough to know which series are worth your time.

We watched every show in the cooking/food genre on Hulu. Read on for the Best Hulu Cooking Shows.

Want to find out which Hulu cooking shows are worth watching?

There is a whole section devoted to food shows. It’s under “TV” and then look for the “Cooking & Food” tile.  While every series is related to food in some way, they all have very different approaches. We’ve broken them into food competitions, travel food shows, and cooking shows meant to teach.  Some are purely for entertainment, some teach, and some inspire.

With over 40 offerings across those categories, let’s see which Hulu cooking shows are worth watching.

If you are looking for the traditional show where the host cooks a meal and chats while giving you some tips, here’s what to watch.

Celebrity Chef and restauranter Gordon Ramsay is no stranger to television. Many know him from competition shows where his over-the-top personality shines. “Ultimate Home Cooking” shows a softer side of Ramsay as he cooks breakfast, lunch, and dinner in his home, often with his children by his side. The meals are simple, but his technique and tips elevate them all. We learned a lot from this show and love how he incorporates all meals as sometimes it’s tough to come up with breakfast and lunch dishes.

“The Food That Built America”

This show from the History Channel takes the viewer through time to discover how many American products started. From how Frank Mars began his company to why Cadwallader C. Washburn began cereal production, viewers watch as actors reenact scenes from long ago. It’s informative, entertaining, and gives you a greater understanding of some of the biggest food manufacturers.

“The Next Thing You Eat”

In this series, David Chang explores what’s next in the food industry. From the explosion of delivery services like Grub Hub and Uber Eats to how the most important meal of the day is changing, Chang shows us what he and others believe the future holds. This Hulu original is slickly produced and informative.

You’ve seen their short videos on social media taking you through a dish in less than a minute. Now, this Buzzfeed media company put their informative videos in one place. Each show is ten minutes or less and takes you through everything you need to know on a specific topic. Think of it as a long-form blog article. The subjects seem simple, but everyone from complete novices to experienced home cooks will learn a few things.

Sometimes we don’t want to learn; we want to be entertained. These shows do just that. Some are intense, while others are calming and perfect for the background.

Some may argue that this Emmy-winning Bravo show put cooking competitions on the map. It’s easy to see why. The show is engaging, fun and many contestants go on to great success in the culinary world. Every season the challenges change along with the city to keep things interesting. It’s a great binge.

Things heat up in this competition show hosted by Food Network star Alton Brown. In it, contestants can sabotage their competitors with unusual ingredients and techniques. It’s interesting to see what lengths the chefs take to win. Not everyone is in it for the money. After you’ve watched a few episodes, check out the Mashed article detailing what happens behind the scenes.

This Fox Food show is the newest addition to the culinary competition world. Twelve contestants compete in teams of two to figure out which dish they are supposed to make. Clues are left in the crime scene kitchen to help. It’s a very different take on food competitions and a fun watch.

“Taste the Nation With Padma Lakshmi”

“Top Chef” host Padma Lakshmi shows her culinary chops are she travels around America to discover the best foods made by various immigrants. It’s an informative look at how cuisines shape lives.

Viewers watch as rapper and food-lover Action Bronson and his buddies travel on tour and enjoy dishes from around the world. Whether it is four-star dining or food truck finds, these friends discover the best.

The episode in Brooklyn ends with Bronson dining in the parking lot of a steakhouse is a must-watch.  It may not be family-friendly as it features cursing and lots of marijuana, but it’s highly entertaining.

It’s challenging to find vegan food shows. “Raw Vegan Not Gross” is a show specifically dedicated to recipes that without animal products. Despite the name, the ingredients aren’t always raw. But the dishes are inventive. Both vegans and non-vegans will be inspired after watching.

What are your favorite cooking shows on Hulu? Let me know in the comments below; I’d love to hear. Be sure to check out the best cooking shows on Amazon Prime, to get even more culinary enjoyment.

Previous Post: « Avocado Oil Spray: Everything You Need To Know Plus 7 Great Uses
Next Post: 15 Of The Best Kitchen Stocking Stuffer Ideas — Most Under $10 »