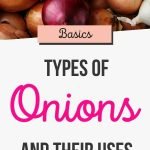 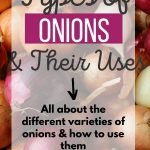 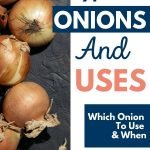 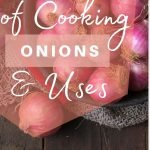 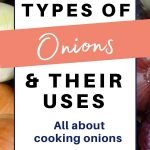 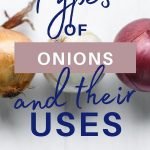 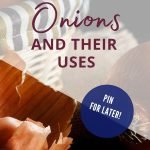 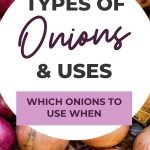 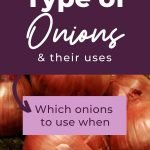 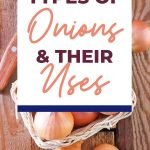 I was determined to learn about the types of onions.

A recent recipe I was reading called for a “sweet onion,” I realized that I had no idea what that meant. Then I looked in the pantry and saw several types of onions. Staring at me were red, white, yellow, shallots, and scallions. It was then that I realized that I didn’t know what the differences between them were.

Want to learn all about the types of onions?

Don’t have time to read? Here’s the Chalkboard version.

There are differing opinions as to where exactly onions originated. Some believe that the allium was first grown in Central Asia, while others believe they originated in Pakistan and Iran. Regardless of where they began, one thing that is known is that onions have been around since prehistoric times. These simple vegetables actually predate farming!

Onions were considered a great way to sustain human life. They are portable, quench thirst, and are easy to grow. Onions also have a long shelf life and are easy to preserve. These qualities made them very useful during the winter months when other vegetables weren’t available.

Fast forward to thousands of years later, and humans still love the various types of onions. A majority are grown in China but most Chinese onions stay within the county to feed their population. Surprisingly, the Netherlands is the largest onion exporter.

Onions are naturally low in fat and cholesterol. Besides that, they don’t offer a ton of nutrients. According to Nutrition Value, 1 cup of raw onion offers 1.7 grams of fiber, which equates to six percent of the recommended daily value. The various onion types also offer calcium and potassium, but other vegetables out there are more nutritious. That being stated, onions add a fantastic flavor.

While many Americans are embracing organic produce, they aren’t buying organic onions. Only ten percent of onions purchased are organic. Farmers can grow more onions organically, but the demand isn’t there.

Perhaps the reason is that onions are naturally resistant to pests, and therefore most conventional farmers do not need to use pesticides. According to a recent study, “ it cannot be concluded that organically grown onions, carrots, and potatoes generally have higher contents of health-promoting secondary metabolites in comparison with the conventionally cultivated ones.”

Onion Types And Their Uses

Green onions, also called scallions, are an immature onion that hasn’t fully grown. When you purchase a bunch, you get the entire plant, from bulb to tip. Use them for garnish and to add color and crunch to dishes.

Sometimes these onions look more purple than red. This variety is sweet and tangy. When raw, they add great color to otherwise green salads. If the flavor is too sharp, soak the chopped onions in water for a few minutes. Red onions are the type most often pickled.

Sometimes overlooked, shallots are small, brown-skinned onions. Similar to how a bulb of garlic has cloves, a shallot includes several lobes. They are useful in salad dressing and sauces because their texture makes them easy to chop finely. Some describe the flavor as pungent and garlicky.

These tend to be larger and thinner skinned. When a recipe calls for a sweet onion, use Maui, Vidalia, and Walla Walla. They live up to their name with a sweet taste and are much less intense than their yellow cousins.

This variety is popular in Mexican and Southwestern cuisines. White onions have a higher sugar content and don’t last as long as the other types. They are used in white sauces, as well as potato and pasta salad.

By far, the most popular type of onion is yellow or brown onion. Over 87 percent of onions grown in the US are this kind. They are best for caramelizing and sauteeing to build flavor in a dish. If a recipe calls for a Spanish Onion or doesn’t specify, use a yellow onion.

Now that we know the difference between the varieties, the question remains, does the type of onion matter? The answer is no. Most people can only tell the differences between onions by color and not taste. You can use yellow most of the time when cooking or baking. Yellow onions are too strong to be eaten raw. In those cases, white or red will work just fine.

When purchasing onions, look for consistent color on the paper and tight, firm necks. When you cut them open, you want to avoid using any flesh that is bruised or blemished. Most onions varieties should be stored in a cool, dry place. Only store sweet onions in the refrigerator.

What types of onions do you like to use? Do you buy organic onions? Why? Let me know in the comments below. I’d love to hear.

If you want to learn all about some other essential ingredients, check out our posts about butter and cooking oils.

Previous Post: « Online Grocery Shopping Hacks To Save You Money In 2020
Next Post: Oklahoma Onion Burger A Healthier Version! »