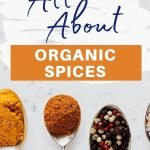 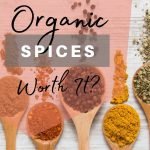 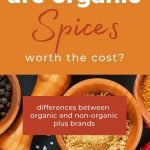 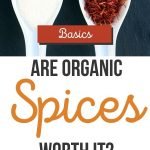 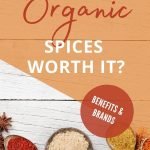 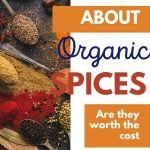 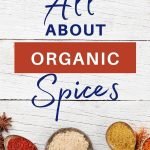 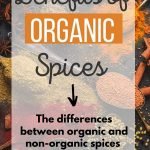 The American appetite for spices has tripled since 1960, according to a 2015 USDA report entitled, “The Spice Market in the United States: Recent Developments and Prospects.

The study didn’t directly address consumption, only availability. However, the USDA analyst that created the document insisted that availability represents consumption in this case. We are enjoying more spices than ever!

Another interesting takeaway from the report was that spices fall in and out of favor. While caraway seeds used to be widespread, interest has declined. On the other hand, chile peppers have seen a boom. If we are increasing our consumption of spices, should we be buying the organic versions?

Want to learn what the benefits of organic spices are and if they are worth the additional cost?

Don’t have time to read? Here’s The Chalkboard version.

What Are The Differences Between Non-Organic And Organic Spices?

Spices are harvested just like vegetables, and that lends the crops to similar issues. A big concern for spices is salmonella. A recent study found that salmonella was present in 12 percent of imported spices.

One study by the FDA  noted that the “bacterial loads on untreated spices are high.” The US imports almost 60 percent of its spices from other countries. This high import rate can be problematic. In some developing countries, growing conditions, sanitation and hygiene practices among the workers, and lack of good manufacturing and agricultural practices contribute to contamination.

There are several different processes to remove any unwanted organisms from the spices.

Ethylene oxide, sometimes called oxirane, is a gas used in fumigation. This highly potent gas can destroy most viruses, bacteria, and fungi, including bacterial spores. Fumigation is the same process that hospitals use to sterilize surgical equipment.

Another process used to reduce contamination in spices is irradiation. Similar to canning food and pasteurizing milk, irradiating herbs get rid of microorganisms that can cause illnesses.  Irradiation processes include x-rays, gamma rays, or electron beams. While it sounds scary, the FDA, USDA, WHO, and CDC insist that the process is safe.

The FDA has been evaluating the effects of irradiation on food for the past 30 years. NASA irradiates any meat that the astronauts eat to ensure that no one suffers from a food-borne illness while in space.

Organic spices are not immune to processing. To remain organic, they cannot be irradiated or fumigated. However, since the threat of contaminants still exists, organic spices need to be treated.

Steaming is what you picture. The spices are subjected to high-pressure steam for a short time (20-40 seconds). Some criticize the process, stating that it decreases the spices’ aroma and taste, but recent advances have helped increase vacuum-assisted steamed spices’ quality.

Now the million-dollar question, are organic spices better? There hasn’t been much research on the topic as to the health benefits of the organic version.

However, when you purchase organic spices, there are some advantages. Just like their vegetable counterparts, organic herbs are grown with fewer pesticides. Many insist that they taste better since they lack preservatives and aren’t processed heavily.

Organic farming practices overall are known to be better for the environment. The lack of pesticides creates better soil and has less of an impact on animals.

Organic spices are a more environmentally-friendly choice.  Many spice companies have taken their commitment to the earth so far as to ensure that they use biodegradable and recyclable materials in their packaging.

Here are some options if you are interested in purchasing some organic spices.

A woman-owned business based in Colorado, Smith & Truslow only sells certified organic spices. Their products are also certified kosher and gluten-free.

Simply Organic is a brand that you are likely to find in most grocery stores. The company is part of the Frontier Co-Op.

Do you use organic spices? Where do you purchase them? Do they taste better? Let me know in the comments below. I would love to hear!

Interested in organic vegetables? Learn why you should join a CSA.