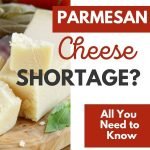 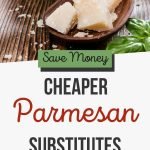 From the green shaker to the triangular block, parmesan cheese is popular on dinner tables worldwide. This grated cheese adds a salty flavor to various dishes, from pizzas and pasta plates to soups and salads.

So when I heard of a potential parmesan cheese shortage in 2021, I started to freak out. Seriously, don’t mess with my cheese! A cooler head prevailed, and I researched all about this scenario along with some solutions.

Want to learn about how to handle a parmesan cheese shortage in 2021?

Is There A Parmesan Cheese Shortage in 2021?

First things first, is there going to be a parmesan cheese shortage in 2021? The simple answer is no, production remains the same, but prices may skyrocket this year.

The pandemic placed a considerable demand on milk, which lead the prices to go up. This strain has trickle-down effects on the cost of the products that contain it. You may have noticed that some products including fresh mozzarella and cream cheese, have already gone up in price. Parmesan’s pricing lagged because it ages 10 months before it hits the shelves.

“Specifically… starting in April 2021, the price of parmesan will go up by $1.50-$2 for a pound and about $0.70-$0.75 for a wedge—and the surge will last for six months or longer,” according to Schuman Cheese Chief Customer Officer Neil Cox via Eat This Not That.

We are big proponents of saving money on groceries, so if parmesan is now out of your budget, don’t despair, there are other options to satisfy.

Can Parmesan Cheese Only Be Made In Italy?

Yes, and to be an authentic Parmesan Reggiano cheese it needs to be made in the specific regions of Italy, Parma, and Reggio. The area is small and doesn’t have many producers, which makes the cheese cost more than other varieties.

How Do You Know If Parmesan Cheese Is Still Good?

Since parmesan is now even more expensive, we need to make sure that we store it properly. Cook’s Illustrated insists that the best way to keep parmesan cheese is to place it in a large Ziploc bag. Be sure to remove any additional air before sealing for optimal freshness.

Unopened Parmesan can last in the refrigerator for 7-9 months. Opened, it will stay with optimal quality for about 1-2 months. The taste will degrade over time but you can still eat it for about six months. If you see any mold on a block of cheese, it’s ok to remove the spot and eat around it. The rind will often have a darker color, so there is no need for concern. As with any food, your senses are the best way to determine if something has gone bad. If it looks or smells funny, it’s best to discard it.

To get the most out of your cheese, don’t discard the rinds! While they are often too hard to grate, they still can provide a ton of flavor. Place them in any pasta sauce while it simmers or collect a bunch and then boil them in water for a cheesy topping for pasta.

Have you head about a parmesan cheese shortage in 2021? Have you seen an increase in the price? Let me know what recipes you love with cheese in the comments below. I’d love to hear.

Previous Post: « 6 Surprising Benefits Of Family-Style Meals Plus How To Do It
Next Post: Here’s Why Duke’s Mayonnaise Is Different Than Others »