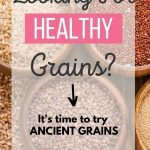 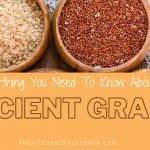 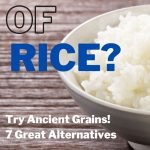 Recently,  the unthinkable happened.  I got sick of cooking! I know, I know! The girl who loves to eat and can talk about food all day long got tired of cooking! But the spark was gone. So instead, I was making stir-fries over and over. I knew my family needed to be fed but couldn’t think of what. Sick of the same old stuff; I needed to change things up.

So I went to trusty Pinterest for inspiration. I pinned and pinned and pinned recipes. When looking at the board, there was a trend. It was full of grain salads. They were colorful and not too complicated, and because of that, I was all in!

As I read the recipes, I saw ingredients I had never tried before — namely bulgur and farro. I found that they were ancient grains after a quick search. I was intrigued. What were they? Where could I find them? Most importantly, how did they taste? I needed to know everything, and as a result, I tried seven ancient grains.  After all of this research, I realized that they are all excellent rice alternatives.

History of Ancient Grains – What Makes A Grain Ancient?

There is no precise list of ancient grains, but the simple definition is “grains that have been mostly untouched over the past hundreds of years.”

Explorers found ancient grains in all corners of the globe. Many have been around for thousands of years with fascinating histories. There are stories of the grain Kamut found in King Tut’s Tomb, the Emporer Montezuma collecting Amaranth as a tax, and Millet pre-dating rice in China — recent research has it at over 10,000 years old! Why had I never heard of these before?

Ancient grains are in most specialty food stores, and the health benefits are well worth the trip.  I quickly found them at Whole Foods and Wild By Nature. While each grain offers specific nutrients, all ancient grains are plant-based proteins and whole grains.  Both of which are essential for optimal health.

The USDA recommends half of your grains consumed during the day be whole grains due to the many health benefits.  Here are a few, according to “The Complete Whole Grains Cookbook.”

These health benefits are pretty impressive, and because of that, you are itching to try ancient grains but don’t know where to start? Here’s everything you need to know about ancient grains.

What Are The Seven Ancient Grains?

Amaranth technically isn’t a grain but a seed popular in Mexico that dates back over 8,000 years. Some believe the Aztecs worshiped it. This grain cooks in about 35 minutes and becomes the consistency of a porridge. Try it as a replacement to polenta or as a breakfast similar to oatmeal.  It is high in fiber and iron and offers 47g of whole grains per serving (that’s a lot!)

Bulgur is ready in just 15 minutes. The quick cooking time is because it’s partially cooked cracked wheat. The fine texture makes it great in pilafs and soups. I use it as a couscous substitute.  This tabbouleh recipe with bulgur started my ancient grain quest.  It’s delicious!

Dating back over 5,000 years, Chia seeds have recently become popular again. These tiny black seeds are packed with fiber and Omega-3 fatty acids and are a great addition to smoothies, yogurts, and even salads. They become pudding when left in the fridge overnight.  Who doesn’t want pudding for breakfast? Another great use is sprinkled on peanut butter toast, fruits, and even salads. Because of the small size, a little bit of chia seeds goes a long way.

Similar to barley, farro is of Italian descent.  It has a great, chewy texture that holds up well in salads. Use it the same way as rice in recipes when cooking. However, in contrast to rice, farro is denser and has more bite. As for nutrition, it is an excellent source of iron and fiber.

Pronounced Kah-moot, Kamut is an Egyptian grain with a nutty and buttery taste.  It puffs up when cooked and is an excellent rice alternative.  Similarly, it works well in pilafs, soups, and salads.  The cooking time is high on Kamut, clocking in at about an hour, but you can cut that time in half if you soak it overnight. Either way, it is worth trying it. Kamut is one of my favorites!

A gluten-free grain, millet’s tiny seeds add flavor and texture to dishes. Popular as a rice substitute, it was the predominant grain in China before r However, e.  I found it to have a bit of a more pungent taste than I prefer from grains.

Quinoa is currently surging in popularity.  As a result, you can find it on the Applebee’s menu. This seed has a great taste and texture.  It holds up well to pilafs, salads and can even be used in baked gooIn addition, it’sIt’s an excellent plant-based protein.

Much to my husband’s chagrin, constant red meat consumption is not the best for ideal health. The USDA has dietary guidelines which recommend varying your types of proteins. Plant-based proteins are lower in calories and fat and higher in nutrient content than animal-based proteins. Therefore eating plant-based proteins gives you more bang for your caloric buck!

There were a few misses but a lot of hits in my quest to try ancient grains. I was overall so happy to have these grains get me out of my cooking funk! As a result, farro, bulgur, quinoa, and Kamut have easily worked into my weekly meal plans and helped me change up some of the standard meals.

The Kitchen Chalkboard’s Ancient Grains Pinterest Board is full of recipes so check it out!  Also, comment below if you have tried ancient grains before. I’d love to hear your favorites.