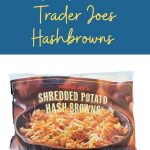 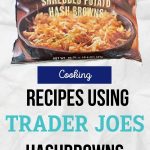 Let’s face it. Some cooking tasks are tedious. And while many are necessary, if there is a shortcut that doesn’t compromise quality, it’s worth taking.

These unseasoned shredded potatoes are the ultimate timesaver. They are the basis of many meals, are filled with potassium,  and can be on the table in no time. You can even cook them in the oven.

Want to learn all about Trader Joes hashbrowns?

This freezer item has just two ingredients, potatoes, and dextrose.

There are only two ingredients in Trader Joe’s Hash Browns, potatoes and dextrose. Potatoes are not an issue, but dextrose could be.

How To Cook Trader Joes Hashbrowns In The Oven

Yes! You can cook Trader Joes hashbrowns in the oven.

These potatoes are an excellent cooking shortcut. They have no added salt or seasoning, so you can easily customize them. The texture is perfect, and they crisp up nicely. We have had them for breakfast, dinners, and as an appetizer.

It’s worth noting that they shrink when you cook them, so make more than you think you’ll need. One package fed my hungry family of four.

What Goes Well With Hashbrowns

These Trader Joes Hashbrowns are versatile, so there isn’t much they DON’t pair well with. But here are some ideas.

Have I convinced you to try Trader Joes hashbrowns? How do you use them? Let me know in the comments below; I’d love to hear.

Previous Post: « An Honest Carote Pan Review – A Pan Under $25 That Does It All
Next Post: Can You Eat Shrimp Tails? Yes, You Certainly Can, And You Should »